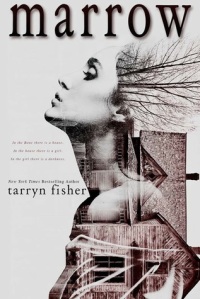 I don’t even know what I’ve just read. The shocking plot twist really messed with my mind. Only one thing’s for sure: Tarryn Fisher has done it again, flawlessly.

This book it’s so different from what I usually read yet kept me fascinated from the beginning. It is dark, very dark. It is definitely not a romance story, but it is about love, or the absence of it. The writing is impeccable, and the descriptions are captivating. Even though the more I think the less I understand, I truly loved it.

Be bold about your right to be loved. And most importantly, don’t be ashamed of where you’ve come from, or the mistakes you’ve made. In blindness, love will exhume you.

Marrow tells us the story of Margo Moon, a girl from The Bone, a town ruled by poverty, criminal activities and despair. She is an incredibly strong girl, I really liked her. She was the epitome of how a person can progress and overcome pain and fear. I have to say though, that everything was perfect for me until the hospital scene. It was like the whole story changed… better start from the beginning. Her origins are very sad, growing up without a father and with a mother that didn’t seem like it. She barely even noticed her, didn’t feed her and made her witness her endless sexual encounters with different strangers. And the fact that she was also very unhappy with herself just made it worse. Judah, her wheelchair-bound handsome neighbor, was the only thing that made her life more bearable. Once they knew each other, they became inseparable.

You have to be willing to be happy. Despite the mess of your life—just accept what’s happened, throw away your ideals, and create a new map of happiness to follow.

In the meantime she had to face some serious events, like discovering who her father was, and the death of her mother and unborn sister. Nothing she couldn’t handle. Everything else was quite the same until the murder of Neveah, a little girl from her neighborhood. That’s when she feels the need of doing something due to injustice and everybody’s indolence. Something changes inside of her, and it’s the beating to little Mo that triggered her killer instinct. I have to say that I was bothered by the whole scene; it was a bit too descriptive for me. But I also think that it had to be that way so we could understand what was actually happening. After that situation Lyndaeh’s death was something that had to be done. I just couldn’t believe that she truly killed her little girl, or at least that let it happen. Anyway, it still surprised me how raw and cruel her murder was, and how little affected and unperturbed was Margo by it. I mean, I understand that Navaeh deserved justice, but you would think that burning someone and hearing her screams would somehow mess with your head or heart, even if you know what she’d done.

I was gladly pleased when she finally had the courage to escape from The Bone, even if it was a little difficult at the beginning. What I didn’t anticipate though, was the fact that she would have to face evil right away. At that point, her extreme reaction was expected; the criminals stood no chance.  The stalking may have been a result of what she considered to be her new mission in life, yet the thoroughness of it still amazes me.

It was really impressive how everything changed and went drastically wrong with Leroy’s lection. How did she end up being the kidnapped one? It was awful, and even more what happened next. Regarding to the connection with Mud Vein, I have to admit that I had not recognized the doctor till Senna showed up screaming pinkzippo. It surprised me how strong was the link between the two books, and how the actions of one character had a direct impact on the other’s life. In any case, that revelation paled in comparison to the plot twist that followed. Pardon me but, WTF? Nothing made any sense. It was so shocking to discover that the only person who ever truly cared for her ended up being an imagination. That made me so sad, I just couldn’t believe it. I wasn’t expecting something like that AT ALL. Even though I tried to find pieces inside my head that were coherent with the new revelation I just couldn’t. The worst part for me was that I couldn’t tell what really had happened. How much of the things that we though we knew were actually real? My questions ranged from whether she was truly a killer to if she had lived in The Bone or even if she really existed. Everything got worse when Judah reappeared.  All I could think of was “what the heck was going on? Did I miss something?”. I don´t know. Maybe the metaphors were somehow too smart for me to understand.

Marrow’s ending was shockingly abrupt. I don’t really know how to feel about it.

The story was going absolutely perfect for me until she was institutionalized in the mental hospital. Margo was an outstanding character, and I really liked her former idea of being a voice (or action) to those in disadvantage. However, she took it to the extreme. Her vengeance left me speechless. To cut off his penis and take his eyes? A bit too much to me. It was sad to see her reach that point. Even though her way of bringing justice to the world was hardly the best way to do it, I was proud of her. But thinking about what she did to Leroy was just depressing.

Underneath my skin and underneath the sinewy tendons of muscle, my bones are rattling. Rrrrrra ta ta ta My marrow cries out, reminding me of who I am. I am Margo Moon.

What impressed me the most was the whole Judah revelation. Did he truly was an imagination? I read somewhere that maybe he was real and Margo’s doctor invented everything just to mess with her head. I rather think that everything was real, and accept the fact the Judah was the invention that helped her getting out of that place, and that’s it. That she really is a murderess but her main objective is to protect the helpless from the malicious souls.

Marrow made me realize how much I love this author. Without a doubt, I will read every single book that she writes.